The chamber approved the package after a grueling marathon of amendment votes and last-ditch negotiations. The measure must now clear the House a second time.

WASHINGTON — President Biden’s sweeping $1.9 trillion stimulus bill passed a deeply divided Senate on Saturday, as Democrats pushed through a pandemic aid plan that includes an extraordinary increase in safety net spending in the largest antipoverty effort in a generation.

The package, which still must pass the House before it heads to Mr. Biden’s desk to be signed into law, is the first major legislative initiative of his presidency. The measure seeks at once to curtail the coronavirus pandemic, bolster the sluggish economy and protect the neediest people within it. Republicans voted unanimously against it and assailed it as unnecessary and unaffordable.

It would inject vast amounts of federal resources into the economy, including one-time direct payments of up to $1,400 for hundreds of millions of Americans, jobless aid of $300 a week to last through the summer, money for distributing coronavirus vaccines and relief for states, cities, schools and small businesses struggling during the pandemic.

Beyond the immediate aid, the bill, titled the American Rescue Plan, is estimated to cut poverty by a third this year and would plant the seeds for what Democrats hope will become an income guarantee for children. It would potentially cut child poverty in half, through a generous expansion of tax credits for Americans with children — which Democrats hope to make permanent — increases in subsidies for child care, a broadening of eligibility under the Affordable Care Act, and an expansion of food stamps and rental assistance.

Its eye-popping cost is just shy of the $2.2 trillion stimulus measure that became law last March, as the devastating public health and economic impact of the coronavirus crisis was coming into view. It is the sixth in a series of substantial spending bills Congress has enacted since then, and the only one to pass without bipartisan support, although it is broadly popular with members of both parties outside Washington.

“Today I can say we’ve taken one more giant step forward in delivering on that promise, that help is on the way,” Mr. Biden said in remarks at the White House. “It wasn’t always pretty, but it was so desperately needed, urgently needed.”

Yet with Democrats newly in control of both houses of Congress and Mr. Biden embarking on his first major legislative push, the party-line vote was an early indicator of the Republican opposition that threatens the new president’s agenda in a 50-50 Senate.

As leading Democrats raced to avoid a lapse in unemployment benefits set to begin on March 14, a bleary-eyed Senate approved the package 50 to 49, with one Republican absent. Final passage came after a grueling 27-hour session in which Democrats beat back dozens of Republican efforts to change the bill, and scaled back the jobless aid to placate moderates in their own ranks who were concerned that an overly generous federal payment would keep Americans from returning to work, stifling the recovery.

The marathon session featured the longest vote in modern Senate history, as Democratic leaders stalled for time during last-ditch negotiations with Senator Joe Manchin III of West Virginia, a moderate holdout, to trim the unemployment benefits so the measure could proceed.

The resulting package was a narrower version of Mr. Biden’s original plan, with major progressive priorities either dropped or curtailed to accommodate Mr. Manchin and other moderate Democrats. Unlike the president’s proposal and a version passed by the House last weekend, it omits an increase in the federal minimum wage to $15. It also narrows eligibility for stimulus checks and reduces weekly unemployment payments, which Mr. Biden and Democrats had hoped to increase to $400.

Still, the pandemic aid bill was one of the most far-reaching federal relief efforts ever to pass Congress, and represented a bid by Mr. Biden to use the power of the government to tackle the pandemic and invigorate the economic recovery by pouring immense amounts of money into initiatives to help low-income Americans and the middle class.

“The most important thing is what we delivered for people,” Senator Chuck Schumer of New York, the majority leader, said in an interview. “The danger of undershooting is far greater than the danger of overshooting, and this may have been our last chance.”

The legislation would send another round of direct payments to American taxpayers making $75,000 or less and extend weekly unemployment benefits through Labor Day, making a large portion of jobless aid from last year tax-free. It would provide $350 billion for state, local and tribal governments, $130 billion to primary and secondary schools, $14 billion for the distribution of a vaccine, $12 billion to nutrition assistance and money for reopening businesses around the country.

It would also provide a benefit of $300 per child for those age 5 and younger — and $250 per child ages 6 to 17, increasing the value of the so-called child tax credit in an effort to significantly reduce child poverty. The bill also includes $45 billion in rental, utility and mortgage assistance, $30 billion for transit agencies, and billions more for small businesses and live venues.

The measure also would provide federal subsidies for people to keep the health insurance they had from work if they lost their jobs.

Researchers at Columbia University project the overall package will lift more than 13 million people from poverty this year, including nearly six million children, and estimate that a permanent program of children’s payments would decrease child poverty nearly in half.

“Not since Social Security have we made that kind of commitment to cut poverty,” said Christopher Wimer, a co-director of the university’s Center on Poverty and Social Policy.

The legislation remains broadly popular across the country, with state and local officials in both parties joining the chorus of industry groups, advocacy groups and voters calling for the federal government to provide additional relief. But congressional Republicans rallied against the plan, arguing that it was far more than what was needed and could overheat the economy. They cited a steady increase in vaccinations and more than $4 trillion allocated over the last year.

“The Senate has never spent $2 trillion in a more haphazard way or through a less rigorous process,” Senator Mitch McConnell, Republican of Kentucky and the minority leader, said Saturday morning as he urged his colleagues to vote against the bill.

They charged that in passing the pandemic relief package without their support or input, Mr. Biden had already failed to adhere to the promises of unity that carried him through the 2020 election and served as a cornerstone of his inaugural address. But Democrats scoffed at the complaints, noting that Republicans had not shown a willingness to negotiate a compromise that met the challenges the country faced.

Newly empowered in the Senate, Democrats instead chose to bypass Republican opposition and the risk of a filibuster — which takes 60 votes to break — and pass the legislation using a fast-track process known as reconciliation, which only requires a majority. But the strict budgetary rules governing the process forced Democrats to curtail their ambitions for the legislation, as did the competing factions of moderate and liberal lawmakers unafraid to wield their influence given the slim margins of control.

Even with changes, the bill remained more than than double the size of the roughly $800 billion stimulus package that Congress approved in 2009, when Mr. Biden was vice president, to counter the toll of the Great Recession. Top Democrats, many of whom voted to pass that bill and recalled winnowing down the package to appease Republicans, who still opposed it almost unanimously, said they were determined not to make the same mistake again.

Because the Senate package differs from the House version, it now returns to the House for a final vote, expected on Tuesday. Frustrated progressives could revolt and try to block it, but given the wide array of liberal priorities it addresses, leading progressives including Senator Bernie Sanders of Vermont, the chairman of the Budget Committee, signaled they were satisfied.

“Despite the fact that we believe any weakening of the House provisions were bad policy and bad politics, the reality is that the final amendments were relatively minor concessions,” said Representative Pramila Jayapal of Washington, the chairwoman of the Progressive Caucus.

The struggle to push the measure through the Senate included two consecutive overnight sessions. First, Senator Ron Johnson, Republican of Wisconsin, registered his objections by forcing the chamber’s clerks to read the entire 628-page bill aloud, a 10-hour-and-44-minute oration that began Thursday and ran into the early hours Friday. When the Senate reconvened in daylight, Mr. Manchin ground Senate action to a halt for more than nine hours as he successfully sought more reductions to the unemployment benefits.

Republicans then forced nearly three dozen amendment votes, a process that stretched until noon Saturday, in an effort to prolong an outcome they could not stop. The rejected changes included scaling back the entire plan to about $650 billion, conditioning school funds on the number of in-person classes, and reallocating state and local government funds elsewhere.

“Regrettably, there was no interest from Democratic leadership in negotiating a targeted, bipartisan relief package that meets the challenges at hand,” said Senator Susan Collins, Republican of Maine. “Our country is at its best when we come together as Americans to overcome the challenges we face.”

The effort also highlighted divisions among Democrats about how aggressive to be in tackling liberal priorities. The minimum wage increase fell out of the measure after a top Senate official determined that it did not comply with the strict budgetary rules that apply to reconciliation bills.

Mr. Biden, who worked in recent days to maintain Democratic support for the measure in a series of phone calls, also agreed to lower the income cap that determines who could receive a stimulus payment to $80,000 for individuals, $120,000 for single parents and $160,000 for households. He had proposed income levels $20,000 higher.

Under the bill, the full $1,400 check would go to Americans earning $75,000 or less — or $112,500 for single parents and $150,000 for couples. The size of the stimulus payments would fall gradually for those with incomes above those thresholds and disappear altogether for those earning more than the income caps.

Hoping to win over Mr. Manchin and other moderates, Democrats scaled back their hopes for raising the federal weekly unemployment payment to $400 and instead proposed keeping it at $300 but lengthening the duration of the program, until early October — about a month longer than Mr. Biden’s original plan. But even that solution proved unsatisfactory to Mr. Manchin, who insisted that the payments lapse sooner.

The stimulus bill represented a bid by President Biden to use the power of the government to tackle the pandemic and invigorate the economic recovery by pouring immense amounts of money into initiatives to help low-income Americans and the middle class. Credit...Anna Moneymaker for The New York Times

After hours of haggling, Democrats bowed to his wishes and agreed to forgo both the increase in payments and most of the additional extension. The resulting deal sets the expiration date for jobless aid at Sept. 6, just a week after the date Democrats had initially wanted.

But Democrats agreed to include a tax sweetener that would make the first $10,200 of unemployment payments from 2020 tax-free, in a bid to ensure that unemployed workers were not hit with an unexpected tax bill. After negotiations with Mr. Manchin, they limited it to those earning less than $150,000.

The legislation also would allocate $50 billion to the Federal Emergency Management Agency to bolster vaccine distribution and help support struggling families across the country, and send $49 billion for testing and tracing. 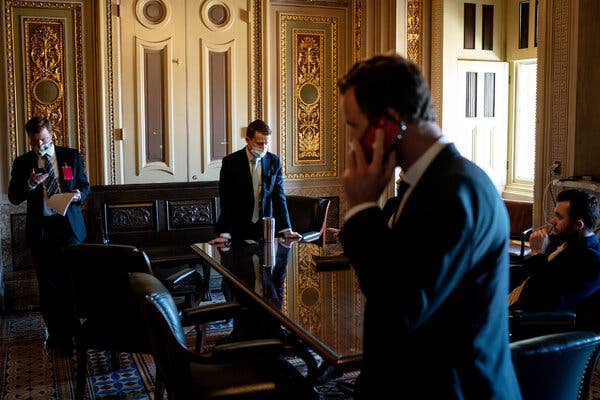