Representative John Lewis, a son of sharecroppers and an apostle of nonviolence who was bloodied at Selma and across the Jim Crow South in the historic struggle for racial equality, and who then carried a mantle of moral authority into Congress, died on Friday. He was 80.

His death was confirmed in a statement by Nancy Pelosi, the speaker of the House of Representatives.

Mr. Lewis, a Georgia Democrat, announced on Dec. 29 that he had Stage 4 pancreatic cancer and vowed to fight it with the same passion with which he had battled racial injustice. “I have been in some kind of fight — for freedom, equality, basic human rights — for nearly my entire life,” he said.

On the front lines of the bloody campaign to end Jim Crow laws, with blows to his body and a fractured skull to prove it, Mr. Lewis was a valiant stalwart of the civil rights movement and the last surviving speaker from the March on Washington for Jobs and Freedom in 1963.

More than a half-century later, after the killing in May of George Floyd, a Black man in police custody in Minneapolis, Mr. Lewis welcomed the resulting global demonstrations against police killings of Black people and, more broadly, against systemic racism in many corners of society. He saw those protests as a continuation of his life’s work, though his illness had left him to watch from the sidelines.

It was very moving, very moving to see hundreds of thousands of people from all over America and around the world take to the streets — to speak up, to speak out, to get into what I call ‘good trouble,’” Mr. Lewis told “CBS This Morning” in June.

“This feels and looks so different,” he said of the Black Lives Matter movement, which drove the anti-racism demonstrations. “It is so much more massive and all inclusive.” He added, “There will be no turning back.”

He died on the same day as did another civil rights stalwart, the Rev. C.T. Vivian, a close associate of the Rev. Dr. Martin Luther King Jr.

Mr. Lewis’s personal history paralleled that of the civil rights movement. He was among the original 13 Freedom Riders, the Black and white activists who challenged segregated interstate travel in the South in 1961. He was a founder and early leader of the Student Nonviolent Coordinating Committee, which coordinated lunch-counter sit-ins. He helped organize the March on Washington, where Dr. King was the main speaker, on the steps of the Lincoln Memorial.

Mr. Lewis led demonstrations against racially segregated restrooms, hotels, restaurants, public parks and swimming pools, and he rose up against other indignities of second-class citizenship. At nearly every turn he was beaten, spat upon or burned with cigarettes. He was tormented by white mobs and absorbed body blows from law enforcement.

On March 7, 1965, he led one of the most famous marches in American history. In the vanguard of 600 people demanding the voting rights they had been denied, Mr. Lewis marched partway across the Edmund Pettus Bridge in Selma, Ala., into a waiting phalanx of state troopers in riot gear.

Ordered to disperse, the protesters silently stood their ground. The troopers responded with tear gas and bullwhips and rubber tubing wrapped in barbed wire. In the melee, which came to be known as Bloody Sunday, a trooper cracked Mr. Lewis’s skull with a billy club, knocking him to the ground, then hit him again when he tried to get up.

Televised images of the beatings of Mr. Lewis and scores of others outraged the nation and galvanized support for the Voting Rights Act, which President Lyndon B. Johnson presented to a joint session of Congress eight days later and signed into law on Aug. 6. A milestone in the struggle for civil rights, the law struck down the literacy tests that Black people had been compelled to take before they could register to vote and replaced segregationist voting registrars with federal registrars to ensure that Black people were no longer denied the ballot.

Once registered, millions of African-Americans began transforming politics across the South. They gave Jimmy Carter, a son of Georgia, his margin of victory in the 1976 presidential election. (A popular poster proclaimed, “Hands that once picked cotton now can pick a president.”) And their voting power opened the door for Black people, including Mr. Lewis, to run for public office. Elected in 1986, he became the second African-American to be sent to Congress from Georgia since Reconstruction, representing a district that encompassed much of Atlanta.

‘Conscience of the Congress’

While Mr. Lewis represented Atlanta, his natural constituency was disadvantaged people everywhere. Known less for sponsoring major legislation than for his relentless pursuit of justice, he was called “the conscience of the Congress” by his colleagues.

When the House voted in December 2019 to impeach President Trump, Mr. Lewis’s words rose above the rest. “When you see something that is not right, not just, not fair, you have a moral obligation to say something,” he said on the House floor. “To do something. Our children and their children will ask us, ‘What did you do? What did you say?’ For some, this vote may be hard. But we have a mission and a mandate to be on the right side of history.” 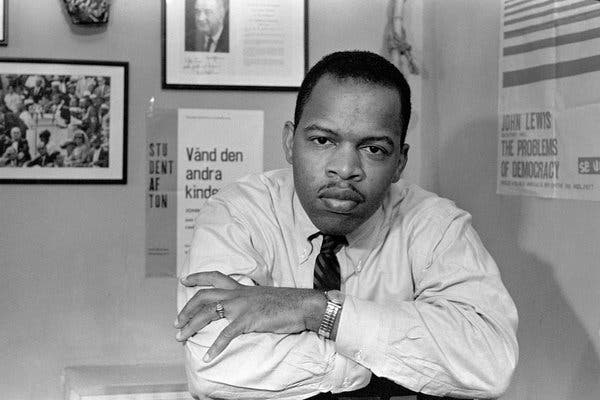