Ruth Bader Ginsburg, the second woman to serve on the Supreme Court and a pioneering advocate for women’s rights, who in her ninth decade became a much younger generation’s unlikely cultural icon, died on Friday at her home in Washington. She was 87.

The cause was complications of metastatic pancreatic cancer, the Supreme Court said.

By the time two small tumors were found in one of her lungs in December 2018, during a follow-up scan for broken ribs suffered in a recent fall, Justice Ginsburg had beaten colon cancer in 1999 and early-stage pancreatic cancer 10 years later. She received a coronary stent to clear a blocked artery in 2014.

Barely five feet tall and weighing 100 pounds, Justice Ginsburg drew comments for years on her fragile appearance. But she was tough, working out regularly with a trainer, who published a book about his famous client’s challenging exercise regime.

As Justice Ginsburg passed her 80th birthday and 20th anniversary on the Supreme Court bench during President Barack Obama’s second term, she shrugged off a chorus of calls for her to retire in order to give a Democratic president the chance to name her replacement. She planned to stay “as long as I can do the job full steam,” she would say, sometimes adding, “There will be a president after this one, and I’m hopeful that that president will be a fine president.”

When Justice Sandra Day O’Connor retired in January 2006, Justice Ginsburg was for a time the only woman on the Supreme Court — hardly a testament to the revolution in the legal status of women that she had helped bring about in her career as a litigator and strategist.

Her years as the solitary female justice were “the worst times,” she recalled in a 2014 interview. “The image to the public entering the courtroom was eight men, of a certain size, and then this little woman sitting to the side. That was not a good image for the public to see.” Eventually she was joined by two other women, both named by Mr. Obama: Sonia Sotomayor in 2009 and Elena Kagan in 2010.

After the 2010 retirement of Justice John Paul Stevens, whom Justice Kagan succeeded, Justice Ginsburg became the senior member and de facto leader of a four-justice liberal bloc, consisting of the three female justices and Justice Stephen G. Breyer. Unless they could attract a fifth vote, which Justice Anthony M. Kennedy provided on increasingly rare occasions before his retirement in 2018, the four were often in dissent on the ideologically polarized court.

Justice Ginsburg’s pointed and powerful dissenting opinions, usually speaking for all four, attracted growing attention as the court turned further to the right. A law student, Shana Knizhnik, anointed her the Notorious R.B.G., a play on the name of the Notorious B.I.G., a famous rapper who was Brooklyn-born, like the justice. Soon the name, and Justice Ginsburg’s image — her expression serene yet severe, a frilly lace collar adorning her black judicial robe, her eyes framed by oversize glasses and a gold crown perched at a rakish angle on her head — became an internet sensation.

Continue reading the main storyYoung women had the image tattooed on their arms; daughters were dressed in R.B.G. costumes for Halloween. “You Can’t Spell Truth Without Ruth” appeared on bumper stickers and T-shirts. A biography, “Notorious RBG: The Life and Times of Ruth Bader Ginsburg,” by Irin Carmon and Ms. Knizhnik, reached the best-seller list the day after its publication in 2015, and the next year Simon & Schuster brought out a Ginsburg biography for children with the title “I Dissent.” A documentary film of her life was a surprise box office hit in the summer of 2018, and a Hollywood biopic centered on her first sex discrimination court case opened on Christmas Day that year.

The adulation accelerated after the election of Donald J. Trump, whom Justice Ginsburg had had the indiscretion to call “a faker” in an interview during the 2016 presidential campaign. (She later said her comment had been “ill advised.”) Scholars of the culture searched for an explanation for the phenomenon. Dahlia Lithwick, writing in The Atlantic in early 2019, offered this observation: “Today, more than ever, women starved for models of female influence, authenticity, dignity, and voice hold up an octogenarian justice as the embodiment of hope for an empowered future.”

Her late-life rock stardom could not remotely have been predicted in June 1993, when President Bill Clinton nominated the soft-spoken, 60-year-old judge, who prized collegiality and whose friendship with conservative colleagues on the federal appeals court where she had served for 13 years left some feminist leaders fretting privately that the president was making a mistake. Mr. Clinton chose her to succeed Justice Byron R. White, an appointee of President John F. Kennedy, who was retiring after 31 years. Her Senate confirmation seven weeks later, by a vote of 96 to 3, ended a drought in Democratic appointments to the Supreme Court that extended back to President Lyndon B. Johnson’s nomination of Thurgood Marshall 26 years earlier.

There was something fitting about that sequence, because Ruth Ginsburg was occasionally described as the Thurgood Marshall of the women’s rights movement by those who remembered her days as a litigator and director of the Women’s Rights Project of the American Civil Liberties Union during the 1970s.

The analogy was based on her sense of strategy and careful selection of cases as she persuaded the all-male Supreme Court, one case at a time, to start recognizing the constitutional barrier against discrimination on the basis of sex. The young Thurgood Marshall had done much the same as the civil rights movement’s chief legal strategist in building the case against racial segregation.

When Ruth Ginsburg arrived to take her junior justice’s seat at the far end of the Supreme Court’s bench on the first Monday of October 1993, the setting was familiar even if the view was different. She had previously stood on the other side of that bench, arguing cases that were to become legal landmarks. She presented six cases to the court from 1973 to 1978, winning five.

Ms. Ginsburg in 1972. She became the first tenured female professor at Columbia Law School before moving on to the United States Court of Appeals and then the Supreme Court.Credit...Librado Romero/The New York Times

Ms. Ginsburg started from the premise that she needed to provide some basic education for an audience that was not so much hostile as uncomprehending. She took aim at laws that were ostensibly intended to protect women — laws based on stereotyped notions of male and female abilities and needs.

“The justices did not comprehend the differential treatment of men and women in jury selection and other legal contexts as in any sense burdensome to women,” she said in a 1988 speech. She added: “From a justice’s own situation in life and attendant perspective, his immediate reaction to a gender discrimination challenge would likely be: But I treat my wife and daughters so well, with such indulgence. To turn in a new direction, the court first had to gain an understanding that legislation apparently designed to benefit or protect women could have the opposite effect.”

So there was a successful challenge to an Idaho law that gave men preference over women to be chosen to administer estates, a practice the state had defended as being based on men’s greater familiarity with the world of business (Reed v. Reed, 1971). There was a case challenging a military regulation that denied husbands of women in the military some of the benefits to which wives of male soldiers were entitled, on the assumption that a man was not likely to be the dependent spouse (Frontiero v. Richardson, 1973).

Another case challenged a Social Security provision that assumed wives were secondary breadwinners whose incomes were unimportant to the family and therefore deprived widowers of survivor benefits (Weinberger v. Wiesenfeld, 1975). In that case, as in several others, the plaintiff was a man. Stephen Wiesenfeld’s wife, Paula, had died in childbirth, and he sought the benefits so he could stay home and raise their child, Jason. After the Supreme Court victory, Ms. Ginsburg stayed in touch with the father and child, and in 1998 she traveled to Florida to help officiate at Jason’s wedding. In 2014, in a ceremony at the Supreme Court 42 years after Paula Wiesenfeld’s death, Justice Ginsburg presided over her one-time client’s second marriage.

In a 1976 case, Craig v. Boren, which Ms. Ginsburg worked on but did not personally argue, the Supreme Court for the first time formally adopted the rule that official distinctions based on sex were subject to “heightened scrutiny” from the courts. In that case, the court struck down an Oklahoma law that permitted girls to buy beer at age 18 but required boys to wait until they were 21.

The precise question the court addressed in Craig v. Boren may not have been profound, but the constitutional consequences of the answer certainly were. Although the court never adopted the rule of “strict scrutiny” that Ms. Ginsburg argued for in her early cases, instead reserving that most burdensome judicial test essentially for race discrimination, the initially reluctant justices had clearly embraced the conclusion that the 14th Amendment’s guarantee of equal protection included equality of the sexes. 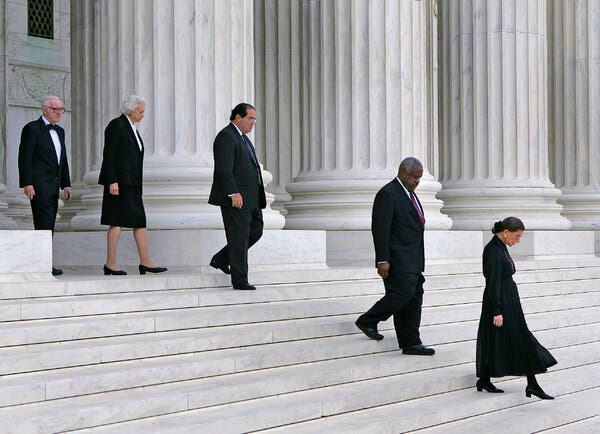